Our Aquafit class just finished as a trickle of young girls appeared and began jumping into the pool.

I headed for the change room.  Being one big room, I saw it was FILLED with young girls between the ages of 8 to 10.  What to do?  I was sure their grandmothers don’t bare their mature, dimpled, rolly-polly bodies to these delicate darlings.

I had no choice but take the example of my fellow “aquifitters” – many being grannies.  They casually hit the showers, did what they could with towels and didn’t waste a minute getting into street clothes.

After my shower, clutching my towel securely, I walked into the change area to find only one small empty space on one of the benches.  Clothes, bags, backpacks, jackets, swimming gear were scattered over every available surface and the chatter of young voices matched the chaos.  I triumphantly plunked my bag down on that one small bare spot.

A tiny girl, about 8 years old, standing over items on the bench, suddenly stood motionless and stared at my bag, then looked up at me. Wearing layered articles of various colours over black tights, it was obvious this young lady was into fashion.  A jaunty, multi-colored cap allowed the escape of long pony tails from behind her ears.  Her expression suggested I’d just helped myself to her private and hard-won space.

“Were you going to use that spot?”  I asked.

“Well, I have two bags that have to go somewhere,” she said.  The raised eyebrow on her attractive face belied her youth.

“How about I hang them here on the hooks for you?”  I pointed to a row of empty hooks that none of the little misses had noticed.

“Okay.”  She handed me a heavy backpack and a plastic bag full of clothing.  I wondered why she was fully dressed while the other girls were joyfully jumping into bathing suits.  She arranged items on the bench like she was preparing wares for a Walmart special.

I couldn’t see a bathing suit.

I hung up the two bags, the backpack gaping open like the mouth of a hungry chick. “Shall I zip up your backpack so nothing falls out?”

“Okay…no, wait!”  She pawed through the chaos on the bench.  I waited, holding the zipper while she searched.  Amazingly, the entire clutter was hers.  How could such a tiny person carry all this STUFF?  What is she up to?

Finally from under one of her piles, she pulled out a stuffed toy. She rushed it over to the backpack.  Once she’d stuffed it well down inside, I zipped the pack for her.

Suddenly the noise level increased even more as another group of young girls giggled and shoved their way in.  Now the changing room held about 15 girls and 6 older Aquafit women.  A young woman in her late teens, looking worn and diffused, had accompanied these later arrivals.  She gave a few instructions with mostly hand gestures and then moved into a corner where she began to don her suit.  Aha! A summer camp.

Now fully clothed, I said to my bench mate, “Was that a special rabbit you put in the backpack?”

“NO!  That’s not a RABBIT!”  She said what it was, but her soft voice didn’t penetrate the noise.

I bent towards her, “Did you say it’s a horse?”  I really dislike asking people to repeat themselves.

“NO!  I said it’s a…!”  I still didn’t hear her and, now, about 4 other little girls circled around and tried to tell me what it was – all talking at once.  I felt I had get to the bottom of this or they’d lose faith in all adults.

My little friend stomped her foot on the floor and put out both hands, palms up, in disgust.  When she saw the grin on my face, she put her hands on her hips and broke into an impish smile.

“Okay…Okay…I’m just having fun with you.  But to be honest, I can’t hear over all this noise.  Speak clearly or I’ll think you brought a hippopotamus to our swimming pool!”

The other little girls caught onto the fun, squealed and began reassuring me we did not have a hippopotamus at our pool.

My bench mate crossed her arms over her chest, cocked her head to one side and shouted, “Wolf!” 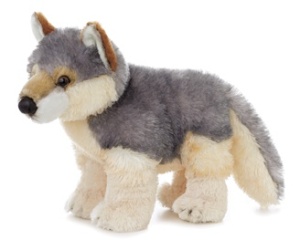 Suddenly the group had a dozen questions. How many?  Did I see live ones?  Did I see their babies?  Was I scared?  Did I ever eat one?

One of them said, “My great, great grandmother ate wild animals!”

“Well, I did, too.  And like your great, great grandmother, it was done with great respect.  We lived where we had to rely on animals to feed us.  We couldn’t easily raise our meat.  We weren’t near a store.  We grew our own veggies and counted on the animals to feed us.”

“She told me,” the young girl explained, “that they only killed them for food.  They didn’t just shoot them because they could!”

“Exactly right!  We would thank the animals for feeding us.  We respected them a lot because they kept us alive and healthy.”

As quickly as the girls appeared, they left for the pool.  I was also ready to leave.

She still had not picked up a bathing suit.  Was there a problem?  I wondered why the camp counseller, still in the change room with us, wasn’t stepping up to help her.  I considered offering, but I needed to get going.  I grabbed my bag, “Well, I’m off. It’s really been great meeting you.  I think that wolf is pretty lucky to have you.  It’s obvious you take really good care of it.”

She quickly claimed the empty spot I’d just left,  “Oh, I’m lucky to have him.  He takes care of me.  And we both hate swimming.  See ya.”

At last glance, she was heading for the plastic bag full of clothing hanging on the hook.

13 thoughts on “Swimming With Wolves”