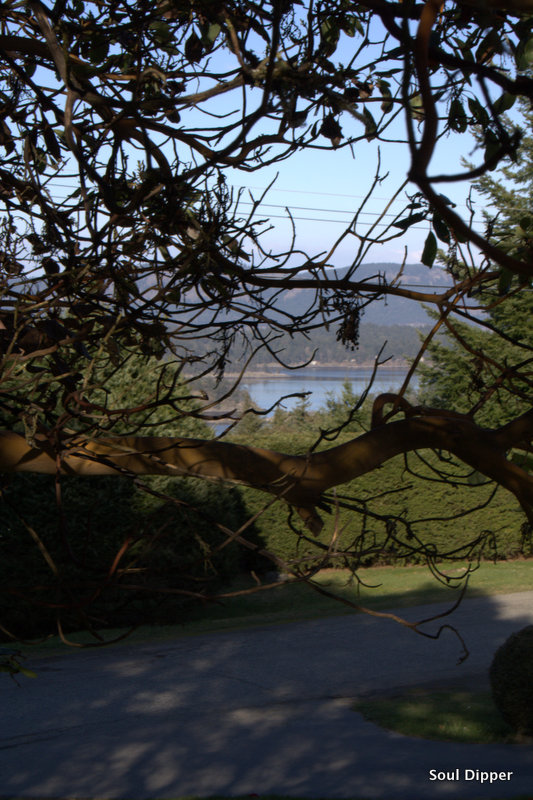 Blessed and soothing silence.  For the first time in over a week, the only sound has been a plane taking off in the Harbour.  No chain saws, no lawn mowers, no weed whackers, no power saws, planers, or hammers.  Not even a dog barking.

We need Noise Days when everyone can converge on the ‘Hood’ and pollute the whole day with noisy tasks.  Imagine how much room that would leave for listening to nature.

Am I a curmudgeon?

It made me think of neighbours living in a small city, Sidney, B.C., a few years ago.  They booted a monstrous oil-rig-building-vessel, the Balder,  out of their waters.

At the time, I thought these mostly-senior folks who strolled the quiet streets of their retirement city were being very un-Canadian.  Horizon pollution? Come on! I was a tinge embarrassed.

The good captain pulled anchor, put the vessel’s crane between its proverbial platform legs and sailed to another location where their economic boost would be welcomed. 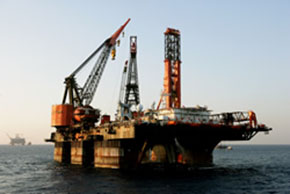 This is the Balder.  I hope my memory is correct…each platform leg is equivalent to 12 or 15 storeys of a building.

The Dutch firm, Heerema, needed to anchor the Balder for a number of months in a location in the Pacific Northwest.  After finishing one contract, the next one was coming a year or so later on this side of the Americas.  It was too costly to move this vessel through the Panama Canal, park in Holland waters and return a year later.

After the formidable non-welcome from the citizens of Grey Power, the Balder found a patch of water further north – outside of Ladysmith.  They anchored outside the view of any center.  Not another murmur was heard.

Just so happened my friend, Julian, owned a marina very near the Balder’s new anchor spot.   Reveling in any marine life, especially when it enhanced economics, this ex-naval cadet jumped into his water taxi and roared out to the Balder.  He tied up at the foot of one of the 12 or 15-storey legs, received permission to climb aboard and introduced himself and his services to the Captain.

An agreement was struck to haul goods and people back and forth to the Balder.  Julian was to become very busy.

I had just finished a northern contract.  Julian needed help at the Marina for a few months.  He’d been diagnosed with Parkinsons.  To sustain himself through this new adventure, he needed regular, healthy meals to stabilize his condition.

As I drove into Julian’s beautiful marina, I saw this “platform” sitting on the horizon.  Suddenly, I understood the concerns of the folks from Sidney.  It looked like an off-shore drilling rig.  However, its job is only to build those rigs.  Picture the deck two football fields long.  It’s girth? Over one football field wide.  Living accommodations facilitated a full crew of 370 people – each unit complete with heating, of course, and air conditioning.  I wondered how anything so big could float.

After some time, the Captain invited Julian and me to HIS table for dinner – not only an honour, but also a welcome break from my cooking.  Since the Balder’s chefs ordered top quality grade food and massive amounts of fresh produce, I knew we were in for a treat.  I didn’t know, however, whether it would be Dutch fare or Indonesian since the skeleton crew of 40 men were largely from Indonesia.

Dying to dress apropos for the Captain’s Table, I remembered I’d have to climb the ladder on the inside of one of the platform legs in order to reach the deck.  I donned a trusty pair of black trousers and accessorized enough to make it “special”.

We sped over light waves toward the Balder.  I reveled in Julian’s ease and confidence on the water.   This man had given me so many marine experiences.  Many people born on the coast have not been so fortunate.  I wondered if he would share a glass of wine with the Captain.  Parkinson’s hadn’t prevented him from making the climb up and down the ladder, but imbibing may be foolhardy even coming down the ladder.

I silently wished the Balder’s crew would “pick us up” by the same crane and heavy netting used to lift supplies off Julian’s work-boat.  Then I remembered how the load swings back and forth, back and forth…   I swallowed hard.  I hated heights.  I had to stop thinking about the climb and just do it.  Thankfully, the Balder was only rocking a bit.

I jumped onto the small platform at the bottom of the ladder and held the line for Julian.  He’d have to secure it to the Balder.  “Do you want me to go first?” Julian asked.

“God no!  If I fall off this ruddy ladder, I want to think someone might be able to grab me!”  I took hold of the first rung and started the climb.  A pang of panic struck about a dozen rungs up.  If I had to chicken out, I had to do it NOW.  Julian was about to begin his climb.  I looked up, but only at the next few rungs.  I didn’t want to know how many were above or below.  One rung at a time…  A rhythm developed and I concentrated on the feel of rusty steel; my god-of-the-moment.

By the time I reached the crew member waiting for us, I realized climbing the ladder had almost become a lifestyle.  Stopping felt strange.  I stepped off the ladder with feigned dignity and refrained from looking down to check on Julian.  On that ladder, it was every man for himself!

After the Captain received and welcomed us, we were led to his Table.  The smorgasbord, arranged with colour and culinary expertise, seemed capable of appealing to any taste.  Indonesian servers quietly saw to our comfort and choices.  I was asked to lead the way and hoped my international travel would serve me well enough to refrain from any embarrassing faux pas.  I was relieved to learn the Captain would be right behind me.  He guided me through the elaborate choices.

After having had an Indonesian prawn appetizer, I chose Coquilles Saint Jacques as my entrée.  A little rice, perfectly prepared asparagus and a fresh green salad dressed my plate and stayed my hunger.

The Captain made a big fuss about Julian accepting “at least ONE glass of wine!”  I decided if Julian showed any sign of balance-challenge, I would insist that the Captain “crane” us down to our boat AND he would come with us!

Hours later, after dinner, tea, and a tour of the Balder’s facilities (games room, gym, etc.), the sun was close to the horizon.  Julian began his thanks and we headed toward the room where we’d find the ladder.  He hadn’t consumed the whole glass of wine so his balance was not impaired.

As I approached the ladder, Julian gave me a choice again, “First or second?”

“First!” I said boldly.  He knew I was petrified.

As I descended, I began to feel ill.  Nerves?  My stomach churned.  I felt hot.  The wind had picked up and the Balder rocked more noticeably.  I gripped each rung as if I might otherwise jump.  I stretched each foot downward keeping my eyes on the rungs.  Contact.  Relief.  Gasp and grasp.  I felt cramps.

Reaching the bottom, I checked Julian’s descent.  All seemed well.  The boat’s bumpers were well placed as the waves and the Balder rallied against each other.  I jumped in the boat.  Secure, at last!

Julian stepped off the last rung, untied the line, and jumped in to start the boat.  I joyfully pushed us away from the Balder.  Relief brought tears to my eyes.  I could finally admit how much of an ordeal this experience had been.

However, it didn’t settle my stomach.  Over the next few hours, I had all the symptoms of food poisoning.

Turned out, I can thank the Balder, a.k.a. “horizon pollution”, for my last feast of exquisitely prepared seafood.  I was diagnosed with a shell fish allergy.

So as I sit, this moment, in my silent neighbourhood, I look over tall trees and other islands without seeing a sign of another human being.  Hints of the odd house hugging the shoreline assures I’m not alone.  And I say thanks for their quiet, non-invasive presence. 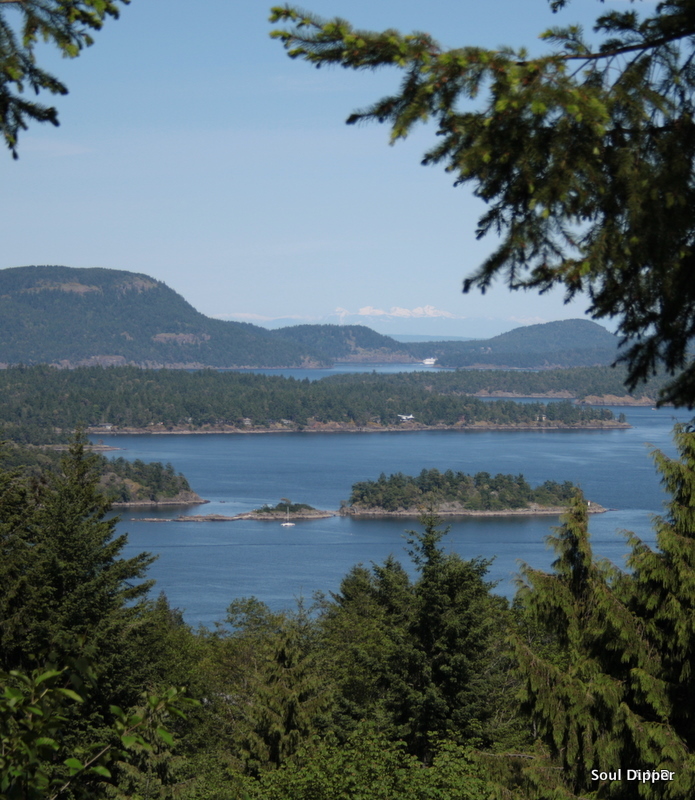 Who wouldn’t express a little Grey Power to have this invaded? 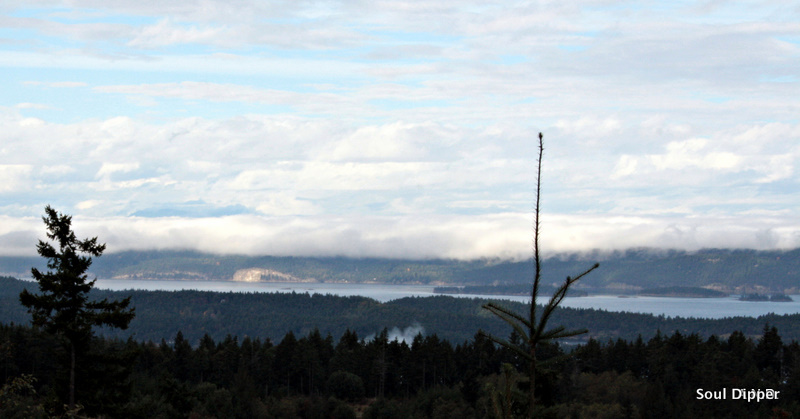 A Summit of Peace