Twenty- seven years ago, I accepted a contract to help a financially struggling School District in the North – next door to Yukon, centered in a mining town that has now been turned back to nature.

During the second of my three-year contract, I hired and befriended a woman who’d arrived to join family while she healed from a double mastectomy.  Vivian was also a hairdresser.  Before long, my salt and pepper tresses were recoloured, reshaped and rejuvenated into an attractive shade of blond.  Playing with hair was a welcome opportunity to build a quality friendship with this petite, feisty woman.  She never fell from her goal to find the adopted daughter taken by the husband who abandoned Viv while she was post-surgery in hospital.  (Yes, Vivian found her and finished raising her.)

The tall guy on the left – that’s Gary. This is likely a typical glimpse of him after a long shift.

Months before my contract was finished, Vivian announced she was going to live with a man named Gary.  I knew him by sight, but had not met him.  He was tall and slim with a jovial countenance.  I said, “Isn’t this a little soon?”

“Amy, I have no breasts and this man wants to be with me.  He’s a good man.  Why would I pass up an opportunity to make a new life?”  Who could argue with a woman whose steady gaze announced a streak of determination bigger than the mountains surrounding us?

Although they shared a home, I still didn’t meet Gary.  Each time I went to Viv for a hair appointment, we whispered and sniffled through laughter as he slept in preparation for yet another extended shift at the mine.  As a plumber, Gary’s services were much in demand.

Twenty some years later, the Mine long closed, I decided to look for Viv.  I could see no trace of her on the Face Book Page set up for those still grieving the Mine’s shutdown.  Then I saw a comment from Gary. On August 19, 2011, I messaged him asking if he was Viv’s partner.  “If you are, would you please ask her to contact me?”

I heard nothing.  I wondered if civility and good manners were thinning out in the older ranks as well.

He was coaching baseball every chance he had. He’s still an excellent coach, but more in front of the TV screen.

Giving Gary the benefit of the doubt, I followed up a few weeks later because he did “friend” me.

On September 28th, after some cheeky messages where his sense of humour became evident, I wrote, “Gary, being serious for a moment…tell me about Viv. She’s got a place so special in my heart! I gather she’s not with you and I’m nervous about that! Did that damned cancer get her?”

He answered:  “Yes Vivian passed away July 3, 2010…after a three month fight with brain and throat cancer.  She weighed less then 60 lbs. It was a very hard time for family and friends.”

Gary and I began to talk occasionally on the phone.  We decided it would be fun to share lunch at a midway point.  He’d fly (no ferries) and I’d drive (one ferry) so we could meet.  While we live about 150 km or 93 miles apart, it’s not simple.  We have mountains, islands, farms, cities and oceans between us.  To visit in either of our home locations, we have to take three ferries and drive a total of about two hours.  That seemingly innocuous distance takes a total of eight hours – one way!

We can’t fly to each other’s homes because the small planes would have to make a “customized” trip which means owning at least one wing of the airplane.

The plan to meet half way, in October of 2011, fell through.  The day before the appointed trip, Gary slipped on ice and hurt his back badly.  There was no way he could crawl into a bouncy float plane or endure a car trip. 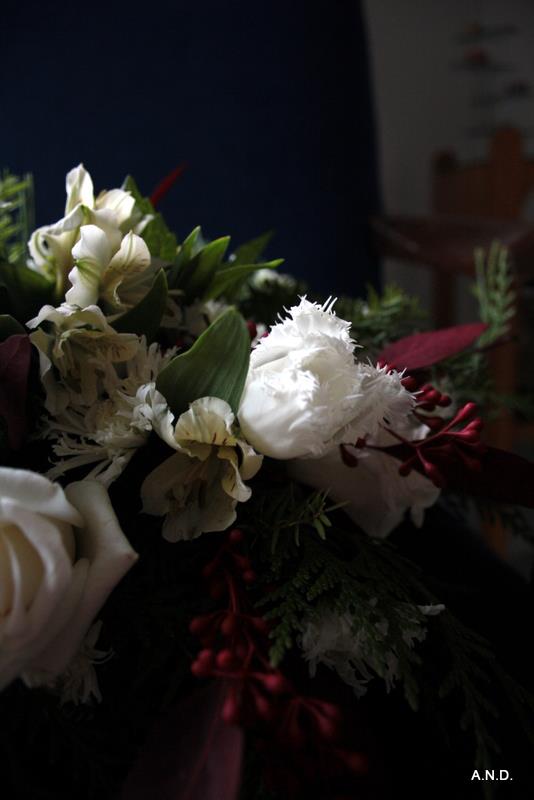 My Christmas Bouquet from Gary

At Christmas, a knock on the door shook me from my writing.  A massive and stunning bouquet arrived with a simple card from Gary.

Our phone calls became more sporadic and we became more distant.  I decided he must be hiding some horrible health condition from me.

Then he confessed that he worried about not being smart enough for me.  I convulsed with laughter.  This man, full of integrity, with a heart brimming with love, was worried about an I.Q..  This man who dropped his life and flew to New Zealand to visit his only sibling, a sister, who had become ill, was feeling under-equipped to have my respect?  He arrived in New Zealand and found his sister dying.  He never left her side.  That takes a much more important substance than brain power.

Soon after that, his mother who had remarried and relocated to Florida, was dying.  He unsuccessfully fought a miserable snowstorm, airlines, and re-routed flights to be with her.  She had been widowed so he had to stay long enough to take care of dissembling her life’s possessions.

To be closer to his aging father, Gary moved to a location outside of Vancouver.  He spent hours each day with

The man attracts orbs in the shape of a champagne glass no less!

his dad until he had to say goodbye.  Little did he suspect he’d be taken away from home again to offer strength, support and love to his ex-wife as she struggled to live in hopes of returning to their marriage.

Well, the heart, if not pounding with devotion, is at least curious.  Gary phoned with an itinerary.  He’d found an animal sitter and was willing to come to my location.

What did we discover?  Being together was so easy.  It was natural, fun, calm, peaceful, hilarious, fitting, dovetailed, and without stress or strain.    Gary said on the phone recently, “I felt as though we’ve known each other our whole lives.”

Is it any wonder a very unique little orb appeared on one of the photos I took of Gary?

Who know where this will go?  Gary and I certainly don’t.

But if you’re willing, we’re happy to have you join our wacky world while we find out.