Dim Sum and Lose Some

Win or lose, it’s the adventure that counts.

We had no business going there.  Two of us could have ended up with bulging eyes, throats constricted and red, itchy blotches all over our bodies.  But it was the adventure of the day…

Four women tired of the overdose of familiarity, we escaped our island home for a day of shopping in Victoria, B.C.  “What do we want to do for lunch?” I asked.

After a round of silence, someone said, “I’ve always wanted to try Dim Sum*.  I hear there’s a great restaurant in China Town.”

“I’ve been there. The food was great,” I said.  A nagging memory of confusion wafted brokenly through my mind.  It wasn’t clear so I ignored it. However, the minute my feet hit the first step of the staircase that would take us up to our Dim Sum experience, I remembered.

“Hey you guys!” I said. “This is going to be a challenge because the staff do not speak English.”

“That’s okay.  Don’t we just point at whatever we want?” one of the gals said.

Karen and I looked at each other.  I’m allergic to shellfish and prawns while Karen cannot even smell anything with peanuts, almonds, etc.  “Karen and I need to know what’s being served.”

“Oh…your allergies!  When Cayt and I order things. we’ll make sure they’re safe for you, too.”  It was a lightweight “fix-it” attempt, but it came from the heart.

“Let’s just see what we find, Karen.  Maybe it will be easier than we think.” My feelings didn’t match the optimism rolling off my tongue. 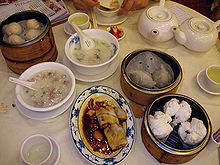 This could have been a photo of our table. If we’d known what we were ordering… (Photo from Wikipedia)

After we were seated, the carts, pushed by different Chinese women, proved to be carrying largely unidentifiable dishes.  Various food items were encased in wraps that provided no clue as to content.  It was confirmed: the staff did not speak English.  There was no symbol or picture explaining what was on the cart.  Karen and I studied the food and finally settled on dishes the other two had confirmed safely edible for us.

I ended up with only two pork rolls and a huge longing for a chicken dish or even simple, steamed veggies.

Since I needed more food and didn’t remember which cart supplied the pork, I watched for similar looking rolls. Finally a cart arrived.  The server was a woman whose demeanour made me wonder if she’d been sent to Canada during a 50 below winter and the thaw hadn’t yet happened. 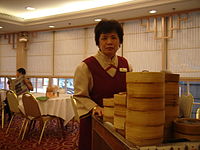 Our servers were dressed just like this and pushed carts exactly like this one – though this photo was taken in a restaurant in Hong Kong. (Photo from Wikipedia)

I put up my hand, “What is this?” I asked slowly, pointing at the food in the round baskets.

“POH!” she said with a hand gesture suggesting they were all the same.

“Pork? Or prawn?” I said, considering the use of charades.  Being a prawn would be a challenge, but did Miss Piggy get over to China?

Since these looked like the pork rolls, I quickly put up three fingers.  She placed three dumplings on my plate.  “POH!” she said with indignation and sped away. 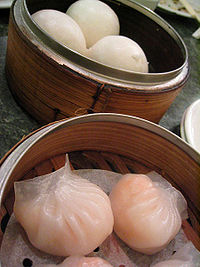 I was so hungry, I took a huge bite.  Whatever made up the dumpling, it was delicious.  I took my second bite.  It included part of the “poh”.  I chewed with satisfaction and looked down at the last section of the delicious morsel.  Sitting inside my roll was one half of a miniscule prawn.

“Damn!  I just ate half a prawn!”  The other three gasped.  They too thought she was saying ‘pork’.

“Do you carry one of those kits?  Either of you?”  Karen and I shook our heads.

“Are you gonn be okay?” Cayt asked.

“That was a very small prawn, guys, so I won’t panic.  In fact, the Doc said that these stupid allergies will leave as quickly as they come.  Maybe it’s gone after all these years.  I’ll tell you if I start feeling anything.  In the past when I’ve had a reaction, it didn’t happen for a number of hours.”

I didn’t tell them the Doc told me that my throat could close in minutes and completely cut off my oxygen supply.  I told my body to accept the prawn and not react to it.  I drank about four cups of Chinese tea and kept telling my body everything was okay.

We finished shopping, running errands and enjoying our day in the city.  We headed for the 7:00 p.m. ferry that would sail us home to our island.

By the time the ferry left its berth, I began to feel itchy.  “Can you see anything on my face?”

The women looked closely with the help of the waning summer sun.  “It looks like you have something like blotches on your neck,” one of them said.

“Okay…we’ll have to head to the hospital as soon as we’re off this ferry.  If my throat closes, please tell the Ferry’s first aid attendant to cut into my windpipe – with or without instrumentation.”  I laughed, but I meant it.

“Hey, Doc,” I said while in the emergency room, “how can I tell if I’m over this allergy without actually eating shellfish?”

He laughed, “Figure that out and we’ll both be rich!  I’ve heard some good wives’ tales, but I wouldn’t trust any of them.”

It was obvious I was not going to have a major reaction.

He gave me a tablet and said with a twinkle, “Poh this down with lots of water!”  I went home and fell asleep on an empty stomach.

Would I do Dim Sum again?  You bet!  Right after I finish a Conversational Chinese course.

*Dim sum refers to a style of Chinese food prepared as small bite-sized or individual portions of food traditionally served in small steamer baskets or on small plates. Dim sum is also well known for the unique way it is served in some restaurants, wherein fully cooked and ready-to-serve dim sum dishes are carted around the restaurant for customers to choose their orders while seated at their tables. – Wikipedia

45 thoughts on “Dim Sum and Lose Some”