“Grandpa went to the Convent to bring his younger sister home.”  Mom shifted and looked away.  “After that, he never stepped foot in a Catholic Church again.  That’s likely the answer to why your father doesn’t come to Church with us.”

“I don’t get it.  What was Grandpa’s sister doing in the convent?”

“She was a nun.  She was very ill and Grandpa felt they were not giving her the necessary medical attention.  So he was bringing her home.”

“Oh.  That’s weird.”  At age 10, however, a surface answer was sufficient.  I decided Dad lucked out having Grandpa mad at  Catholics.  As an Anglican, I had to go to church until I was 16.

Decades later – last April, the road trip with my big brother was a perfect time to ask if he’d heard the story.  “Yes,” he said, “but she was more than ill.  She was pregnant.”

“I don’t know much else.  But I know that’s why Grandpa quit the Catholic Church.”

The story lodged in my heart like a sliver under a fingernail.

I thought I had come through life unscathed by the underbelly of that particular institution.  Patriarchal dominance and abuses, in any religious setting, have been under my radar most of my adult life.  I’ve seen and experienced unjust domination and rejection by male clergy in Protestant Churches.  However, issues within the Catholic Church could be left to Catholics.

Or so I thought.

Linda, of Rangewriter, wrote a post that raised the subject of family skeletons.  I commented unexpectedly about Grandpa and his sister.  Linda didn’t allow that to slide by.  In an email, she asked if I wondered about having a family member who I didn’t know existed.  Could a baby have been born?

I wrote to Linda:  “Yes, you bet I wondered. I do have an aunt [aged 90] – the youngest of my grandparents.  She’s the only one still alive who may know.  I’m going to call her and see if my big bro has his facts straight.  Your comment motivates me to do it NOW…”

Aunt Audrey answered her phone and welcomed my interest in family history.  “Yes, Grandpa did have a younger sister who was a nun.  I’m pretty sure her name was Nell, but this happened over 80 years ago so I was just a little kid.  She was a nun in Northern Alberta – in a very small town.  The Catholic priest at their church got her pregnant.”

“He told her that neither of them could withstand the consequences of the scandal if she were to have the child.  He told her to have an abortion.  You can imagine the draconian methods used in those days.”

“Anyway, Aunt Nell died.  Grandpa was the only relative she had here in Canada.  The rest of the family had stayed in Iowa.  Grandpa’s heart was broken.  He had nothing to do with the Catholic Church again.”

Suddenly, I wanted this soul, Aunt Nell, to know she was not forgotten.

The next morning, during meditation, I asked my Guides if I could receive messaging from or about Aunt Nell.   The love and forgiveness, in the response, impacted transformationally:

The soul named “Nell” assures that she is very much connected with the soul she carried for those weeks – a great Love exists between them. She reminds that all souls come into the physical form with Agreements with other souls.  These Agreements allow all to have the FEELING experiences necessary to evolve toward higher dimensions.  So this baby’s soul had previously agreed to be an embryo so this soul named “Nell” could experience deep feelings of maternal grief, betrayal and subsequent death.  The priest was as much a part of the Agreement as the baby.

There is no judgment towards the priest or the church, only acceptance in the knowledge that this experience led to the fulfillment of her soul’s purpose during her “Nell” incarnation. 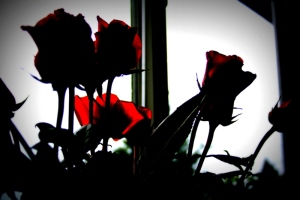 “A rose by any other name…”

In spite of the folds and mystery of death, Aunt Nell’s assurances plucked the splinter from my heart.  The sting has lessened significantly because I trust her model of forgiveness.  The wound nevertheless weeps.  I am no less leery of the patriarchal thrusts and egocentric manipulations towards women and men that continue to stalk the halls of the consecrated and ordained.

Even those events, however, do not diminish the Love I feel for All That Is.  The magnificent energy that is called by so many different names brings endless reassurances that “no man puts asunder”.

I am relieved and comforted to learn there was no family member put up for adoption who could have been overlooked.  I am grateful knowing my Great Aunt Nell’s soul entwines with mine.

(Thank you for the nudge, Linda!)