A Boss of Everlasting Presence

By souldipper April 10, 2012 all the bosses in life Clock is the biggest boss Ever bossed by time insect photography Time Management time warp

“Why do I have to do that stupid job, Mom?”  Frustration filled my five year old heart as I grabbed the cream enamel bowl and stood over the trap door between the kitchen and the living room.  “I always have to get yukky potatoes!  It’s scary down there.  I can hardly see.”

The darkness and the acrid smell lie waiting beneath the trap door.

Receiving no response to my protest,  I raised my voice, “What if the lid shuts when I’m down in that root cellar?”

One of my siblings shouted, “Oh, don’t worry, Amy.  We’d hear you!  You’d scream the roof off the house.”  Laughter from the rest of the lazy crew sounded from various parts of the house.

I pulled on the metal ring and easily raised the trapdoor.  It opened fully so I could rest it on the floor.  I crawled backwards down the ladder into the bowels of cold storage.  Halfway down, I reached out and scraped the enamel bowl across the floor hoping for frenzy-producing screeches.  I continued down the ladder, tucked the flashlight under my chin and began to find potatoes at record speed.  I moaned with disgust having stuck my finger into a slimy, rotten potato that smelled like mold.

“Will you bring up some carrots, too, please, darling?” my mom shouted from the kitchen.

Even more fed up, I shouted,  “Someone come and grab this bowl!  It’s heavy!”.  One of the older siblings reached down for the bowl as I held it over my head.

I grabbed a few carrots from the cobwebbed bin and scurried back to the ladder.  “Here, somebody grab these carrots!”  The carrots disappeared from my up-stretched hand.

I climbed up the ladder and headed for the wash basin.  The impact of what I had touched hit home in full light.  I scrubbed and sniffed until I was sure every drop of potato slime was gone.

The division of labour was unfair and I needed to talk about it to a trustworthy person.  Mom was alone, outside, the next day, “I can’t wait to get big.”

“What makes you say that?” she asked.

“I hate being bossed around.  Everybody tells me what to do.  Like getting stinky potatoes.”

“Do you think you’ll have no bosses when you are bigger?”

“Well, you’ll have a boss even if you are the boss.”

“Yes, you’ll always have a clock.”

“It’s true, my dear.  And time goes faster as we get older.  We have more and more to do with less and less time.”

Now, decades later, wood was delivered and dumped in my driveway.  I stared at the stack of wood through the office window and wondered what happened to my childhood oath.  No bosses?  I looked around:

In protest, I decided to enjoy a cup of tea outside amongst the fragrance of fir and arbutus.   Suddenly a very strange bug landed on the chopping block beside me.

I wanted a photo of him, “Don’t move!  I’m going to get my camera.  I’ll be right back!”  I dashed into the house and grabbed the camera.  I returned within a minute.  He was still there.  I knelt down, adjusted the settings and began shooting.

Thankfully, he sat perfectly still,  “Oh look at those wings!” 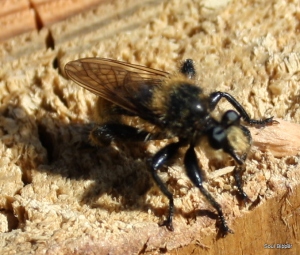 "If I had your wings, I'd just fly away and not have another worry about time!" I said as I continued shooting.

Within a blink, 1/16th of a nanosecond, that insect was there, not there, and back again!  Had I jiggled the camera and lost him momentarily?

Was I in a time warp?

Nope…in a nanosecond, this high tech model of Time Management had taken flight, gone hunting, scored, checked his GPS and returned to the exact same spot…with his prey.

In other words, I had tea with an unidentified bug that demonstrated “bosslessness” better than I’m ever likely to see again.

52 thoughts on “A Boss of Everlasting Presence”