An Incredible Artist and A Hummingbird

“Would you like to join the Probus Club? ”  Gordon and I were chatting at our local theater.

“It’s an organization for people who worked in the business world.  It offers a world-wide network of interesting people and provides a host of speakers on subjects of interest to people our age.”

“No.  Go to Rotary for that.  Rotary initiated Probus for people over 60, but we are autonomous and we do not raise money.”

Even at the risk of being asked to take on secretarial duties, I paid my dues and now sport an indelible name tag.

The fourth presenter, Robert Bateman, Wildlife Artist par excellence was familiar.  Since he’s a neighbour and since his kind deeds permeate our province and country, I wondered what he could offer that most of us didn’t already know. 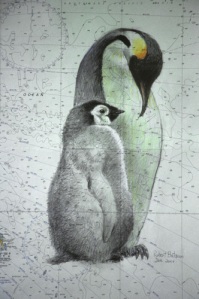 Probus sent an email giving the title of his presentation and nothing else, “Phylosophical Problems”.  The contents would have to be discovered, the notice explained.  We soon learned it would be a topic that fuels this artistic soul.

Robert Bateman was about to share what reporters don’t want to hear from a famous artist.

When this 81 year old Naturalist, Environmentalist and community-minded individual took the podium, his presence suggested the energy level of a much younger man.   He did not stammer.  No proper noun escaped his grasp.  He worked with the power point projection without intimidation.  His determination to open our eyes, partnered with his natural dignity, placed attentive seat belts over our hearts.  Not a sound challenged his presentation.

He warned that disturbing facts and figures about the state of our planet needed to be told.  His world travels have built connections with many people around the globe.  He’s been given insights that must not be ignored.  In addition, his list of resource materials included books, environmental studies and information that people of a lesser passion would ignore.  Obviously we were going to meet a side of Robert Bateman not privy to many.

Robert asked us to be honest about our indifference toward crass commercialism.  Marketers have one goal in mind – to have us congregate into a clump of teenagers like cattle in a corral.  That way, manipulation is simpler and cheaper.  Children from the age of 8, some earlier, are encouraged to own, wear and think “teen”.   People from 20 to 45  are told to act, live and be “teen”.  Responsibility is left to…well, to whom?

The grown ups will soon be gone.  Who will care about Nature?  As one of Robert’s contemporaries said, “Society is practicing a version of ‘grandchild abuse’.”  Not only are we jeopardizing the sustenance of our environment, we are enabling the growing numbers of hours that young people are looking at screens.  They are not living outside, learning about life, language and skills that nature is prepared to teach.  A new acronym will be needed: NDD – Nature Deficit Disorder.

Robert cited another friend, “We better make certain older folks go to the gym and stay fit.  They’ll be pushing their grandchildren in wheelchairs.”

When he reminded us of the universal clock that shows how rapid our rush to midnight, he cited Kurt Vonnegut.  Kurt said, speaking in the past tense, “We could have saved the world, but we were too cheap.”

Were we too cheap or too centered on profit?

The last insight still sits uncomfortably in my core.  I envision desparate people stopping at nothing for fulfillment:

It’s not news that we’ve become pleasure driven people.  However, Robert explained it differently.  He asked us to think of anything in life that gives us the most pleasure we can imagine.  We considered how that felt.  He explained that someone taking pleasure inducing drugs like Ecstasy or Cocaine, experiences the body being thrown into pleasure overdrive.  The drug withholds the normal flow of dopamine, then releases it with a rush 1,000 times greater than normal.

Here’s the important point.   Did you know these drugs burn out the body’s pleasure center?

With repeated use, tolerance to the cocaine high also often develops. Many cocaine abusers report that they seek but fail to achieve as much pleasure as they did from their first exposure. Some users will increase their dose in an attempt to intensify and prolong the euphoria, but this can also increase the risk of adverse psychological or physiological effects.

If Nature will no longer give pleasure, can we expect these people to care about Nature?   What will they do to achieve pleasure?

I needed the solution that Robert Bateman promised.

It was the tiniest of short stories – a powerful one many of us have heard.

– From the book “The Little Hummingbird” by Michael Nicoll Yahgulanaas,  Bowen Island, B.C.

I think Robert identified with that Hummingbird as he dropped each fact on us.

I hope some of the drops landed on my readers today.

Let’s carry our minuscule drops of Peace to the chaos in our world.  Remember that each drop carries a world.  Scoffers will laugh, but only listen to the whispers of Love.  Love is the voice in the wind.  It shapes the drop so all we see is Beauty.

(Later… Celi at http://thekitchensgarden.wordpress.com/2011/12/19/is-it-against-the-law-to-plant-vegetables-on-the-median-strip has been inspired by Robert Bateman’s presentation.  Check out her drop of water!)

41 thoughts on “An Incredible Artist and A Hummingbird”