Double Room, Please. I Travel With An Angel.

A male voice carried through the locked, screened patio door, across my bedroom and into the front hallway where I stood with my groceries.  It said, “This must be what you see all the time!”  My breath stopped.  I slowly lowered the bags to the hallway floor.

I gingerly peeked around the door jam.  A young man sat in one of my lawn chairs outside on my bedroom patio.  The second chair, empty, sat next to his.  Both faced the spectacular view usually reserved for eagles and ravens.  He had his hand on the back of the empty chair, leaning toward it as he continued talking and smiling.  I ducked back.

Relief washed over me when I heard my landlord’s footsteps upstairs. 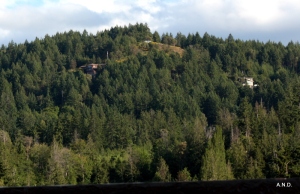 Living where the eagles fly.

Was this my landlord’s friend?  If it was, he had no right to let his buddy sit on my patio.  I peeked around again.

“Yah!  This is why you wanted to come up here.  You wanted to show me what the world looks like from your point of view!”  The baritone voice sang its apparent discovery.

I crept out of my suite, locking the door behind me, to straighten this out with Colin. When I rang his doorbell, he was there immediately.

“The guy sitting on my patio chair outside my bedroom.  He’s sitting there talking to himself.”

“I don’t know what you’re talking about.”

“Colin!  There some weirdo sitting on my patio talking to my empty lawn chair!”

“I didn’t see anyone come.  I was working outside.  What’s he look like?”

“Thirtyish.  I only saw his back, but he looks clean cut.  I saw a backpack near him on the deck.  Is he a friend of yours?”

“I’ll come down and check it out, but I wasn’t expecting anyone to come by today.”

Colin’s house was an aerie.  Accessing the property was not simple.  From our village far below, the house appeared as a perch on the side of a mountain.  Our exceptional view stretched from Whistler, British Columbia to Bellingham in Washington State including all the ocean straits, channels and narrows in between.

“Let’s go into my suite so you can take a secret peek at him.  If you don’t know him, let’s call the RCMP.”

Turned out Colin didn’t know the Stranger.  Being well-belted in Karate, Colin said, “I’ll go back outside and approach him from out there.  We’ll see what’s going on.”

I stayed inside.  Within minutes, Colin escorted the man off my patio and into his truck.  I heard Colin start the truck and take off down the road.

An hour later, Colin told me what he learned.

“All the lights aren’t on for that lad,” he said.  “I asked him what he was doing here and he said that Angel and he wanted to come up here to enjoy the view.”

“Where was Angel?” I asked.

“That’s the thing.  Angel was with him. He went into this big apology that no one else can see Angel.  But that’s who he was talking to when you discovered him.”  Colin chuckled, “I told him he can’t just go to someone’s private property and sit down where ever he likes.  He said that Angel knew good folk who lived here and that’s why he knew it was safe to come to this house.”

“I told him that he had really frightened my tenant.  He apologized and wanted to ask your forgiveness.  I told him I’d let you know he was sorry.  Seeing that he was a simple sort, I drove him to the point where he could easily walk down the hill.  He said they were staying at the motel at the bottom of the road.”

“I’d feel better if you’d tell the RCMP about this.  What if he’s really a major loony?”  Colin agreed to give them a call merely as a heads-up.

The next day, I was in the village when I met a friend, L., who worked at the motel where the Stranger was a guest.  I told her about the Stranger’s visit to my patio with his friend, Angel.

“That must have been why the RCMP came to the Motel to talk with him,” L. said.

“Did they seem worried about anything?” 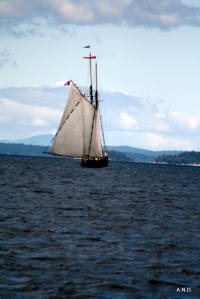 "He Seemed Very Used To Traveling"

“No.  They asked me a few questions about Angel, but I confirmed I had no concerns.  I explained that when he signed in, he insisted that he sign Angel in as well.  I thought Angel was waiting outside.  He was very clear that he wanted a room for two with two beds.  And he gave me his credit card to pay for the room up front.  He seemed very used to traveling.”

The RCMP assured L. that the man was harmless; just a little different.

“After the RCMP visit, the guy called the front desk wanting four more pillows.  Since I was now very curious about him, I delivered the pillows myself.  When he opened the door, I casually asked him where Angel was.

“He said, ‘She’s standing right here beside me.  I know you can’t see her.   I’m the only one who can.  She’s very beautiful.’  So I told him he certainly was blessed to be able to see her.”

L. paused, cocked her head and said, “He spoke so respectfully of her.  He said they travel everywhere together.  She makes sure they are always safe.  It really was touching.  You know, I really believe he sees her!”

The gentle Stranger had obviously touched her heart.  I said, “Did you find out why he wanted four more pillows?”

“He didn’t offer an explanation when I delivered them, but the next day, I found them tucked under the blankets on the spare bed.”

After a shared moment of silent questioning, we shrugged our shoulders and prepared to leave.  L. said, “Just think, Amy.  They could have gone anywhere.  We really were blessed by this gentle soul and his Angel.  Out of the entire island, they chose your patio and my motel as their safe harbours.”

“Maybe you need to be worried that you didn’t!”  She laughed and strode away.

33 thoughts on “Double Room, Please. I Travel With An Angel.”