“The woman with the cat wants to know what day fresh vegetables are delivered!”

The young person of the Nisga’a* (pronounced: Niss-kah) Nation spoke to the owner through an open door in the small grocery store.  This was the only food store in New Aiyansh (pronounced: Eye-Anch – now re-named Gitlaxt’aamiks: Capital of the Nisga’a Nation).  The store amply provided many goods, but, that day, the selection of fresh produce was meager.

‘The woman with the cat’, I thought.  That identification felt acceptable.  Better to be a cat woman than “the geeky white woman from the South who thinks she’s going to tell us what our School District Budget is going to be.”

April of 1998, Mac and I had traveled 900 kilometers (about 450 miles) north, from our island home near Victoria to a small city called Terrace.  From there, we would have to drive another 100 kms further north into Nisga’a territory.

My contract meant spending three weeks putting together a school district budget for a forward thinking Nation that was about to make history.

Little did I know that this vital Nisga’a Nation would become the first to sign a modern-day treaty with the Province of British Columbia and the Government of Canada.  It was done in 1998.  Two year later, on May 11, 2000, the Nisga’a Lisims Government would formally came into effect and the community pass its first laws.

The deal meant the Indian Act would cease to apply to the Nisga’a people, except for the purpose of Indian registration, and Nisga’a people would have the legal authority to conduct their own affairs. It would also recognize the Nisga’a title to 2,000 square kilometres of land in the Nass Valley.

Little did I know that, in preparation for this incredible event, the tiny village of our destination would, in the next week, swell with Nisga’a people coming home to vote on the Agreement that would be taken to the Government.

Mac and I headed North.  We bounced our way around chassis-bending pot holes on a highway that cut through a 250 year old lava bed. The countryside became a “lavascape” of black.  A sheen of eerie green light mysteriously hung above the black land cover.  It was tender spring grasses, likely the only plant life that could grow on the small amount of nutrition captured in between black lava rock.  There were no trees. 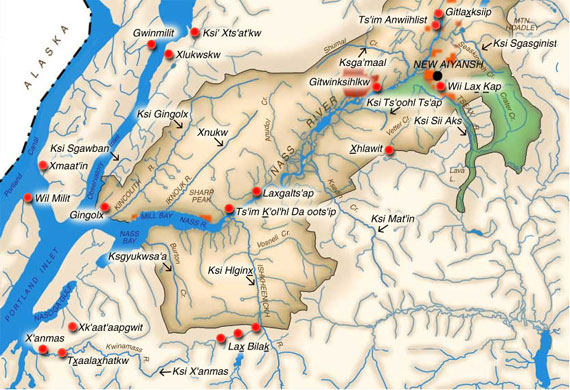 The volcano that erupted all those years before had claimed the lives of 2,000 Nisga’a people and, I was told, had moved the mighty Nass River ten miles north of its original riverbed.

“Mee-yowww-oooo”  Mac let me know that he was growing tired of the rough ride.  It was time for a break.  Though we traveled with a prepared litter box, his pride would only allow its convenience if the equivalent of three starving, snarling wolves lay in wait outside.
He surfaced from the cave he created within the clutter of domestic goods in the back of the SUV.  I had prepared for our accommodation only being partially equipped.  Our temporary home would be a tiny suite attached to the Board Room of the old School Board Office.

As we drove into the village, I was struck by the extreme tidiness of the wide street.  There was no clutter, no sign of loose dogs and every garbage can was contained in a secure metal holder that was chained over the top.  I wondered what could be so precious about garbage.

Without a wrinkle, I found the right corner to turn into the School Board Office.

The minute we stopped, I opened my door and Mac jumped out.  He sniffed the air, surveyed the territory and headed for a cluster of bushes.  The man who had the key to my suite walked over to greet me.  After we introduced ourselves, he said, “Was that a cat?”

“Yeah, he really needed out of the car.  It’s been a long two days for him.”

“Well, ya better keep him inside,” the man said.

The Nisga'a Nation is located in the beautiful Nass Valley of northern BC - from http://ruralvoices.cimnet.ca/cim/86C179_268T29763.dhtm

“Yeah but the bear are just coming out of hibernation.  They’ll love a juicy morsel like that for breakfast.”  A jovial belly-laugh erupted.

“What kind of bear do you have around here?”

“Lots of black bear.  But we’ve also got the Grizzly.  When this village was moved up here to get away from the flooding down on the river, they borrowed the Grizzly’s migration trail for main street.”  He laughed again. “The Grizzly don’t mind sharing, but they figure that anything around that smells like food is fair game.  Our pets pretty much stay home.”

“So that’s why the garbage cans are locked up,” I said.

I knew this gentle soul would not be able to accept a word about the cunning cleverness of General MacArthur.  I also knew that I would not get any sleep if I tried to convince Mac that I loved him too much to let him outside.

Mac was to be free.  I had learned to accept the risk of losing him during all our travels together.  My comfort was knowing that Mac loved and needed adventure and discovery.  If he was to die because of another animal, I knew he would have been doing what he loved most…being free.

Over our seven years together, whenever Mac pounded on the door to be let in, his chatter for the first few seconds of his entry assured me the hunt had been grand.  Falling into a deep sleep right after a good feed, I knew his escapades had called on every ounce of his strength and prowess.

Unlike my incredible little feline, my hunting prowess was exercised by jumping in the car, driving to the store and learning that fresh vegetables may not be a daily staple.

*Note to the Nisga’a people:  Please forgive me if I still have a tin ear, my Nisga’a friends.  As I write, I hear your soft, gentle voices patiently and laughingly correcting me.

21 thoughts on “Mac the Travelin’ Tempest – A Nisga’a Welcome”