Thanks to a new blogging friend, I can now share some photographs of Theresa Bond.

Therefore, this is an addendum to the articles about Daughter Theresa – Parts I, II, III and the Guides Response as well as an introduction to my new blogging friend, Andre.

Andre is from Andre’s Blog.  He linked my articles about Theresa so I immediately had to visit his very new and very polished site.  It will certainly appeal to people of literary taste.   The site includes in a tribute to a published poet, Kate Braid, who has written a poem about Theresa.  (Scroll down to Item #3 to read the poem at this link.) The poem introduces a glimpse into Theresa’s life and plans before her death.

Andre’s Blog includes “Fathers, A Literary Anthology”. The Mission Statement for the Anthology is here at Patremoir Press. Andre has invited me to post one of the stories of my father on this site.  My father would be awed into silence having been granted this honour.  It shall be done.

As Andre and I communicated over email, I learned that he had spent time with Theresa and her husband, Dick in Atlin, B.C.  When I asked if he had a photo of Theresa, he very kindly sent three:

(Italicized comments below photos are from Andre.) 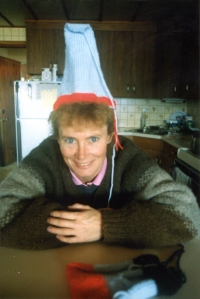 Theresa Having Fun with some Knitting (approx 1989)

The one in which Tess has a piece of knitting on her head was taken almost exactly 21 years ago. 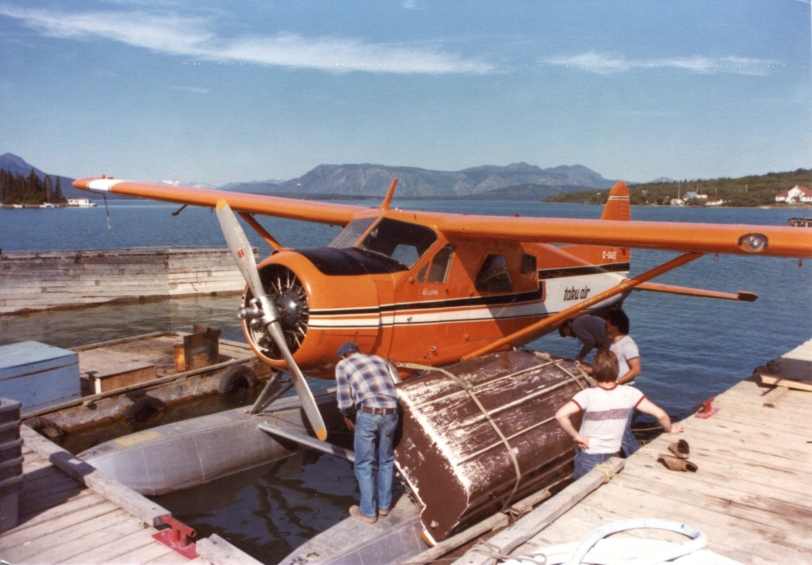 Theresa is Leaning against Dock

The one on the docks was taken around 1981. Dick Bond is standing on the pontoon, and Tess is the figure with her back to the camera, leaning back against the dock.  The boat probably weighed something close to 600 pounds, and I still marvel at how Dick got that unbalanced load off the water.  We had to use a Bobcat to lower it onto the pontoon.  The Beaver, incidentally, is the one Tess crashed.  Tess only survived because Dick had had a specially reinforced pilots seat installed.  He had crashed on a glacier once, killing his young passenger.

Our Bush Pilot of the North

The last photograph is self explanatory.  It was probably taken in 79 or 80.

Andre, thank you for your contribution.

I am so delighted to have met another person who knew Theresa well enough to remember the beauty of her incredible attitude towards life, living and love.

I look forward to visiting your blog regularly.

28 thoughts on “Theresa Bond – Bush Pilot of the North (Photos)”