(Continued from “Someone’s Living In The Bush, Mom” – Part II)

Scamp and I raced home.  “Mom!  Someone’s living in the bush!  She needs help!”

“No, but she needs help!  Come with me!”  I grabbed some wood, paper and a box of matches.

Thankfully, mom saved all her questions for the dash through the bush to the little house.

When we arrived, I knocked quickly on the door and said, “Hi again.  I’ve got my mom with me.”

The woman opened the door and studied my mother.  As we entered the house, mom transformed into a soft, soothing healer of hearts.  She held out her hand in greeting and introduced herself.   I watched a sheen of relief wash over our new friend as she hesitantly smiled and nodded.  She took my mother’s hand in both of hers and said in a voice that could have been mistaken for an angel, “Olivieria Weissaur.  La Pas, Bolivia.” 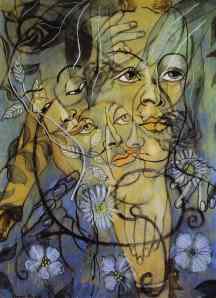 “We’ll talk later, darling, it’s not polite to chat in our language in front of someone who doesn’t understand.”

Mom walked over to the stove, peeked into the opening, and reached for some of the papers I brought.  Olivieria moved closer to the stove and watched.  Mom put the crumpled paper under my twigs, struck a match and soon had a small fire blazing.

As we waited for the fire to take hold, each of us focused on the flames more out of embarrassment than concern.

Finally I was able to add the small pieces of wood I’d brought from home.  Mom found a well used saucepan amongst the clutter on the bureau and filled it with water.  She placed it over the open burner, directly over the flame, ready to bring water to a boil.  She said, “I think Olivieria will want a good cup of coffee.”

Olivieria reached for my mother, embraced her and wept.  Mom held her as though they’d been friends for ever.

Mom helped Olivieria to a chair and handed her the handkerchief she’d stuffed in one of her pockets.  Olivieria burst into more tears so I decided to go outside and find some dry branches.

When I brought the wood inside, the coffee was boiling in the open pan and Olivieria had regained her composure.  Mom and she were sorting through the contents of her trunk.  In a grand display of charades, the two of them seemed to find many items of basic need and necessity.

I watched my mother’s efforts to camouflage her concern.  She may have been able to hide her worry from our new friend, but I knew what she was thinking.  How on earth would this woman survive the winter?

Once Olivieria and mom had their coffees and it was evident that Olivieria had what she needed to feed herself, we made sure the fire was burning well and headed for the trail home.  As we walked, I said, “She can come and live with us when it gets cold, Mom.  I’ll share my room with her.  What language was she speaking?”

Mom explained that the woman spoke German.  “Since she lives in Bolivia, she would also speak Spanish, but she was speaking German words to us.”

“What is she doing here all by herself?” I asked.

“Right now, there is a big fight going on in Bolivia.  I think she would have been part of a German family that had lots of land in that country.  People who were born in Bolivia are demanding their land back from people like her family.  They may have been in a lot of trouble with the Bolivian people.  Olivieria may have come here to be safe.”

“Wow!”  I really felt I had hit the bonanza of important affairs.  “Where is Bolivia?  Is it by Germany?”

“No.  It’s a long way from Europe.  Bolivia is south of us and Germany is to the east.  We’ll look it up in the Atlas when we get home.  We’ll visit Olivieria regularly to make sure she is alright.  You can invite her to our place for meals to start out.”

“Can we get someone who speaks German to come and visit her so I can ask her over?”

“That’s a great idea.  We’ll also need to make sure she has an account at the General Store.  Perhaps the person who brought her here already did that.”

“You know when you were talking with Olivieria right at the beginning when you shook her hands?”

“And you know later when Oliviera hugged you and you held her while she cried?”

“I think it helped me know what you mean about “class”.

Postscript:  (My mother and I returned the next day.  Olivieria proudly served us a piece of pastry with apple, cinnamon and sugar loosely sitting on top of the knot of dough.  I suspect it was meant to be a strudel.  A few days later, when we arrived, Olivieria was gone and the boards were back on the windows.  Town people did not know the house existed and, as there was no Royal Canadian Mounted Policeman in our town at that time, the episode became overgrown with everyday life.   If my mother had not been involved, I doubt anyone would have believed me.  I have remembered Olivieria.  I often speak her name aloud, trying to say it like an angel.  There have been times I have used her name when I did not want someone to know mine.  I often think of Olivieria as I prepare my fires.)

Next:  Continue to Someone’s Living in the Bush, Mom – The Guides Respond

31 thoughts on “Someone’s Living In The Bush, Mom Part III”